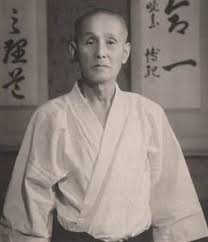 At the age of 5 years, he began training in the martial art of jujutsu under his great-uncle. In 1911, while studying business administration at Waseda University in Tokyo, Ōtsuka trained in various jujutsu schools in the area

Jujutsu was not to remain his primary art, as in 1922 Ōtsuka began training in Shotokan karate under Gichin Funakoshi. By 1928 Ōtsuka was an assistant instructor in Funakoshi's school. He also trained under Chōki Motobu and Kenwa Mabuni, and studied kobudo, around this time. Ōtsuka began to have philosophical disagreements with Funakoshi and they parted company in the early 1930s.

On 1st April 1934, Ōtsuka opened his own karate school the Dai Nippon Karate Shinko Kai in Tokyo. He blended Shotokan karate with his knowledge of Shindō Yōshin-ryū jujutsu to form Wadō-ryū karate, although the art would only later take on this name several years later. With recognition of his style as an independent karate style, Ōtsuka became a full-time instructor. In 1940, his style was registered at the Butokukai, Kyoto, for the demonstration of various martial arts, together with Shotokan, Shitō-ryū, and Gōjū-ryū

On April 29 1966, Emperor Hirohito awarded Ōtsuka the Order of the Rising Sun, Fifth Class for his contributions to karate. On October 9 1972, the Kokusai Budoin International Martial Arts Federation (IMAF Japan) awarded Ōtsuka the title of Shodai Karate-do Meijin Judan (irst-generation karate master 10th dan this was the first time this honor had been bestowed on a karate practitioner. Hironori Ōtsuka died on January 29 1982

The Wado Ryu master whose teaching we all follow

The founder of Wado Ryu karate